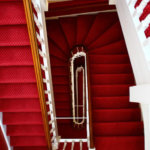 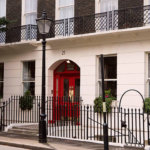 Open House London is the world’s biggest architecture festival. For almost thirty years, Open House has given free public access to more than 800 buildings across the capital, throwing their doors open over one September weekend each year.

The Penn Club in Bloomsbury

Situated at the heart of Bloomsbury, The Penn Club occupies 3 terraced houses opposite Russell Square on Bedford Place – Nos 21, 22 and 23. When the Georgian terrace was built, the large residential homes would have been rather grand. During the 19th century, the scale of the properties became a burden to the households and a number of these properties began to lease rooms out. By the end of the Victorian era, the buildings now occupied by The Penn Club had been joined together and turned into the Alexandria Hotel.

The Penn Club was first based in Tavistock Square and then, from 1938, at its current location in Bedford Place. From politicians to authors, artists to holiday tour organisers, there are some notable individuals who have passed through the doors of The Penn Club. Sometimes permanently, often intermittently, their long-term association with The Club and its buildings led them to call it home. Two of the best known are:

During the early 1800s, 21 Bedford Gardens was home to the Griffin family whose youngest daughter, Jane, would later marry the Arctic Explorer Captain John Franklin. In 1845, Captain Franklin commenced his ill-fated journey to try and find a route through the Northwest Passage across the Canadian Arctic. All 129 men who sailed with Franklin died.

Lady Jane Franklin became a celebrity in her own right through her efforts to discover the fate of her husband and his expedition team. Between 1847 and 1859, some 30 expeditions were launched in search of the lost ships, most sponsored by the Admiralty and Lady Franklin.

One of The Penn Club’s most enduring residents was author John Wyndham. From 1924 until his marriage to fellow Penn Club resident Grace Wilson in 1963, Wyndham lived at and contributed greatly to the community of The Penn Club. As a science fiction writer, John Wyndham’s best known books were penned while he lived at The Penn Club, including Day of the Triffids and The Midwich Cuckoos.

Films based on these books were released while John was still a resident at The Club, but this was his home and he treated it as such. He played an active part in the life of The Penn Club, both as a member of The Club’s committee, organising social events, and the unofficial handyman.

Be sure to reserve your tickets early for The Penn Club’s contribution to the annual Open House event. Tickets will be limited in number, and so to make sure you don’t miss out, please contact The Penn Club to book your place and advise of any accommodation needs you may have.

Where: The Penn Club