A lot has changed in one hundred years. Here are just a few of the personal, local and global events and landmarks that have occurred during the lifetime of The Penn Club.

King Edward ascends the throne and reigns for nine years.

King George V ascends the throne on the death of his father.

HMS Titanic collides with an iceberg on her maiden voyage across the Atlantic to New York and sinks, with the loss of more than 1500 lives.

The assassination of Franz Ferdinand, archduke of Austria-Hungary precipitated the outbreak of war between the principle military powers of Europe. The war would continue for four years.

The Representation of People Act 1918 allowed some women to vote for the first time; but only those over the age of 30 who occupied a house – about 40% of women in the UK at that time.
The same act granted the vote to all men over the age of 21.

In the Rethondes Clearing in the Compiègne Forest near Paris, the World War I Armistice was signed on 11 November 1918 by the Allies and the German plenipotentiaries sat inside this train carriage to sign the armistice, marking the end of World War I.

Announcement of the Penn Club

First public announcement of the desire to form a members Club for young Quakers; made in The Friend.

The Treaty of Versailles signed, setting out the reparations due by Germany following the First World War.
It also established of The League of Nations.

On 14 October 1920, following a brief delay to fully fit out the property, the Penn Club was inaugurated at its premises at 8-10 Tavistock Square, WC1. The Opening Ceremony was chaired by Arnold Rowntree.

Tomb KV62 in Egypt’s Valley of the Kings was discovered by archaeologist Howard Carter. To raise money to pay for the complex process of excavation, preservation and cataloguing the tomb’s riches, Lord Carnarvon who sponsored the dig signed an exclusive deal with The Times newspaper, giving it sole rights to supply the world’s press with news and photographs. The financial support and continued media interest this generated was vital to enable the costly decade of excavation.

Virginia & Leonard Woolf move to 52 Tavistock Square; they continue to live her for fifteen years.

Biologist Alexander Fleming isolated a mould of the Penicillium genus having witnessed its efficacy to kill bacteria.

Black Thursday saw US investors trade 13 million shares on the New York stock exchange, causing billions of dollars to be lost. The market stabilised but suffered further severe losses the following Monday and Tuesday, with contagion spreading globally and the US Stock market falling further as investors tried to sell all stocks at once.
1932
September 10, 1932

Pilgrimage by motorcoach for no more than 100 people to mark the 250th anniversary of the Sailing of William Penn for Pennsylvania, visiting various sites and buildings related to W. Penn across Hertfordshire/Buckinghamshire Chilterns. Organised by The Penn Club & the Friends Historical Society.

A dramatic enactment of 16 key moments of William Penn’s life was arranged at Jordans, the Quaker centre in Hertfordshire. The Penn Club’s warden, Samuel Graveson, was the pageant secretary, and a number of the actors involved came from The Club.

A dinner organised to celebrate the first fifteen years of The Club was arranged, and a group photograph taken, annotated with the names of each member.

Publisher Penguin was founded by Allen Lane who wanted to revolutionise the publishing market by offering high-quality contemporary fiction at bookstores, railway stations and tobacconists for the same prices as a pack of cigarettes.

Edward VIII ascends the throne. His affair with Wallis Simpson had begun in 1934, and he spent the first months as King trying to persuade the establishment to an arrangement whereby he could marry her, but to no avail. The relationship had been kept out of the British press but was announced on 3 December, and a week later he submitted his abdication of the throne.

Following his brother’s abdication on 10 December, George VI ascended to the throne the following day, a role he had never anticipated having. He was crowned king in May the following year.

Due to the landlord’s intention to redevelop the buildings in Tavistock Square that The Penn Club occupied, the Club had to find new premises. Following a long search and weighing up of options, the club took a long lease of the vacated Alexandra Hotel at 21-23 Bedford Place.

Food rationing was introduced across Britain, aimed to ensure fair shares for all at a time of shortage. Overseen by the Ministry of Food, basic foodstuffs such as sugar, meat, fats, bacon and cheese were rationed and available with the requisite coupons. Other items such as tinned and dried goods were allocated according to points, but their availability fluctuated.

Winston Churchill became Prime Minister, presiding over a coalition government formed with key elements from both the Labour and Conservative parties.

The ‘Blitz’ – from the German term Blitzkrieg (‘lightning war’) – was the sustained campaign of aerial bombing attacks on British towns and cities carried out by the Luftwaffe (German Air Force) from September 1940 until May 1941. London was then bombed for 57 consecutive nights, during which time German bombers dropped 711 tons of high explosive and 2,393 incendiaries. 1,436 civilians were killed.

Codenamed Operation Overlord, D-Day saw the Allied forces landing on the beaches of northern France to launch a combined naval, air and land assault on Nazi-occupied France with troops from twelve countries.

The first V1 ‘Doodle bug’ flying bombs fell on London. The intense bombing of London dropped significantly by the end of September, with the final bomb falling in Suffolk in March 1945. During this time, more than 2700 Vergeltungswaffen-1 (Vengeance Weapon 1) fell causing death, injury and psychological misery from the distinct noise, as well as great destruction of Britain’s cities.

On 7th May, Eisenhower accepted the unconditional surrender of Germany, signalling the end of World War Two in Europe. A special announcement was broadcast on BBC Radio late that day, announcing that 8 May, Victory in Europe Day, would be a public holiday.

HMT Empire Windrush arrived at Tilbury Docks, Essex carrying hundreds of people from the Caribbean, enticed to travel by promises of job opportunities in the UK’s post-war labour shortage.

The ambition to create a health service that was free at the point of use by all became a reality.

Famously referred to as the ‘Austerity’ games, London hosted the Olympic games at short notice – the first time the games had been held for twelve years.
1951
January 1, 1951

The Day of the Triffids

Written by long-term resident of The Penn Club, John Wyndham, The Day of the Triffids is set squarely in post-war England. When a freak cosmic event renders most of the Earth’s population blind, the Triffids (plants with lethal stingers and carnivorous appetites which resulted from Soviet biological experimentation) seem set to take control. Suggesting the culmination of human hubris, Wyndham’s apocalyptic vision of nature’s triumph over civilisation is partly stylised, with the trappings of Cold War paranoia.

Arranged to commemorate the centenary of the Great Exhibition, the Festival of Britain was celebrated across the country, but its main focus was the South Bank of the Thames. The Royal Festival Hall was built and opened in time for the exhibition, providing London with a new concert hall. Events, displays and temporary structures were arranged as ‘a tonic for the nation’, focusing on things like town planning, scientific progress, and all sorts of traditional and modern arts and crafts, giving Britons a feeling of recovery and progress.
1953
February 28, 1953

Francis Crick and James Watson announce their discovery of DNA.

The Penn Club purchases its first television set so residents can watch the Queen’s Coronation.

Elizabeth II was coronated queen of England, fifteen months after ascending to the throne following the death of her father, George VI.

At an athletics meeting between British AAA and Oxford University, Roger Bannister ran one mile in 3:59.4, the first man recorded to cover this distance in under four minutes.

The Mark I Mini was developed and launch in response to a fuel shortage, and the need for more efficient city cars.

Soviet Cosmonaut Yuri Gagarin became the first man in space when his Vostok 1 spacecraft was launched at and orbited Earth once in 1 hour 29 minutes.

I have a Dream

Baptist minister and social activist Martin Luther King, Jr. joined other civil rights leaders to organise an historic March on Washington in August. In the shadow of the Lincoln Memorial, an interracial assembly of more than 200,000 gathered peaceably to demand equal justice for all citizens under the law. Here, King delivered his famous “I Have a Dream” speech, in which he emphasized his faith that all men, someday, would be brothers.

Britain’s tallest building opens: Post Office Tower in central London was commissioned by the General Post Office to support microwave aerials carrying telecommunications transmissions from London to the rest of the country.

England win the World Cup, beating Germany in the final 4-2.

Astronauts Neil Armstrong and Edwin “Buzz” Aldrin land and become the first men to walk on the moon.

The Queen officially opens the National Theatre’s dedicated building on the South Bank, London. Comprised of three theatres, the Olivier and the Lyttleton opened in 1976, with the third, the Cottlesloe, opening the following year.

A week of celebrations to mark the Queen’s silver jubilee commences.

One of four nuclear reactors at the Chernobyl power plant explodes. This caused the largest uncontrolled radioactive release into the environment, with large quantities of radioactive substances being released into the air for about 10 days. 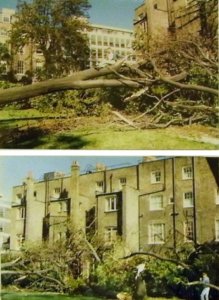 The Great Storm of 1987, infamously downplayed by BBC weatherman Michael Fish, caused severe damage across the country, bringing down trees, powerlines and damage to homes.
In the gardens behind the Penn Club, a large tree was brought down, damaging the rear of The Club.

29 years after it was erected, The Berlin Wall was breached. Built to keep East Berliners inside the Communist Eastern bloc, the decay of Communist states like Hungary that evening crowds gathered to pass through to West Berlin, signalling the end of Communism.

Having served 27 years in prison, Nelson Mandela is released.

Dolly the sheep was born, the first mammal cloned from an adult cell, a technique developed by The Roslin Institute, Edinburgh.

Four suicide bombers attacked central London. 52 people were killed, and hundred more injured. The attacks were spread across the city, including the bombing of a bus in Russell Square.

Senator Barack Obama, elected as President of the United States on 4 November 2008, is inaugurated as the US’s first African American President.

A referendum held, asking citizens to vote if they wanted Britain to remain in the European Union.

A range of events to celebrate 100 years of The Penn Club.